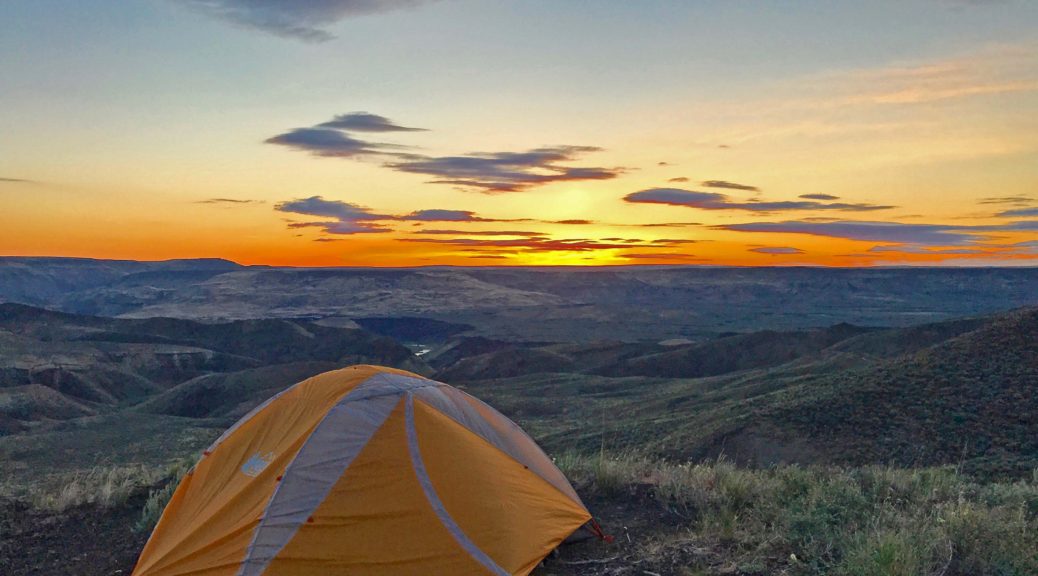 Sunday began with the kind of sunrise that spoke  peace and oneness and concluded with a sunset that invited deep sleep. In between, Michael and I made a major hike through gullys and canyons amidst incredible ash and rock formations. The rain that had challenged us driving here left trickles of water in what are normally dry washes.  The air was cool, the damp “dry” wash walk refreshing.

We reached the Owyhee river and ate lunch.  I napped while Michael fished.  Afterwards we discovered an exciting canyon with the most intriguing and colorful formations we had seen that day. Definitely like Moab, UT, but without the crowds.

Michael found a beautiful agate thunder egg.  He hauled this thirty pound rock back to our campsite as my Father’s Day gift.  What an outstanding son! Scott, the man we had extricated from the mud hole (see the first Chalk Basin post) came over before dinner.  We enjoyed a wide ranging discussion about the presence of God in our lives, and the transformational nature of His deep love for us. 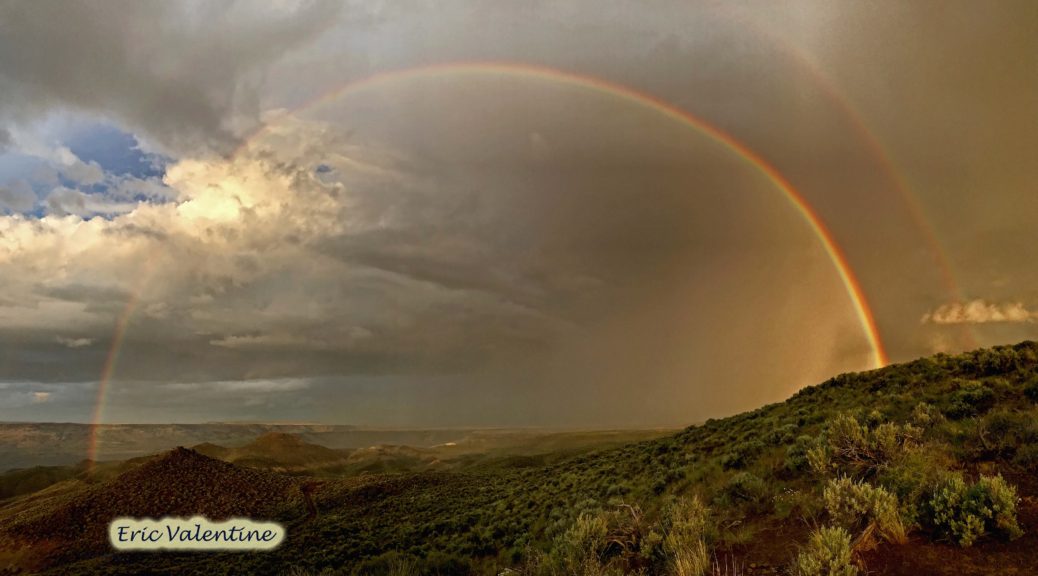 Far, far away from any towns, large or small, lies the Chalk Basin in Southeast Oregon above the lower Owyhee River. A very poor road leads to it.  Although merely bumpy and dusty when dry, this clay road is a quagmire when wet.  The guide book advises it is NO GO after rainstorms.
Son Michael and I ignored that advice over the Memorial Day weekend as we drove through and went around at least two dozen of these mud holes in the Jeep Cherokee Trail Hawk I acquired a year ago. Michael’s  bold confidence took us through places from which I would have turned back.  And, we in fact extricated another rig that had gotten stuck in the mud.
We camped at the end of the road, overlooking the Chalk Basin. The advantage of rain storms is that they create rainbows, and we enjoyed two separate ones, full and nearly double, during the late Saturday afternoon. And the sunset sky, both east and west, filled with glorious cloud shapes and colors.
From here we took two long day hikes, exploring the many nooks and crannies of this country.  Those pictures will follow in the future, but here is a description from the guide published by William Sullivan:
“There are no trails in Chalk Basin’s colorful badlands, but adventurers who explore this remote Owyhee River canyon will discover dry waterfalls, pinnacles, and rock ‘goblins’ reminiscent of Utah’s Bryce Canyon.
“The Snake River once flowed across southern Oregon to join the Klamath River.  As mountains rose along that route to block the river, a huge “Lake Idaho” formed between Boise and Steens Mountain five million years ago.  Another three million years passed before the lake finally spilled north to the Columbia River, carving Hells Canyon along the way. In the meantime, the shells of the microscopic animals had built up layers of diatomaceous earth—chalk—in the lake.  Since then, weathering and minerals have turned the soft chalky deposits into a rainbow of yellows, reds, and whites.”
Michael and I can testify to the amazing colors and geological characteristics of this physically and visually stimulating country side!