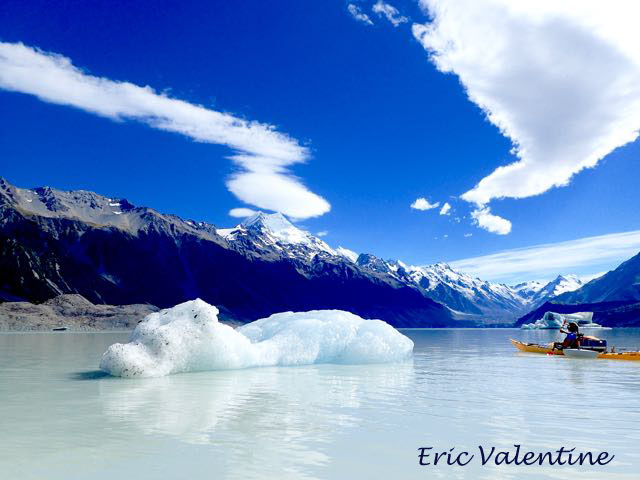 At nearly fourteen and half miles in length, the Tasman glacier is the longest in New Zealand.  Over the past four decades, the lake below it has grown from a large pond to a very large Tasman Lake.  The lake undercuts the glacier and speeds up the iceberg calving process. The day after Meg and I walked the Hooker Valley Track, we took a guided kayak trip on the lake.  Our guide, Anthony (“Ant”) Harris, did an excellent job leading us within appropriate distance of the various sized glaciers. The size and shapes of the icebergs are constantly changing, and they can suddenly roll, sending out major waves.

One fun part of the trip was picking “mini icebergs” out of the water.  We set them on our spray skirts, and then sucked on ice water that, according to Ant, was two thousand years old!  We also paddled across the lake, got out on the shore, and enjoyed seeing reflections of the Mt Cook range, as well as hardy lichens and moss.
For those who are interested, here is some more information about the glacier:
The glacier remained at a constant 28 km (17 mi) in length for all of its recorded history in the 20thcentury before starting its current period of rapid melting in the 1990s. Between 2000 and 2008 alone, the glacier terminus receded 3.7 km. Since the 1990s the terminus has retreated about 180 metres (590 ft) a year on average. The glacier is now in a period of faster retreat where the rate of retreat is calculated to be between 477 to 822 metres (1,565 to 2,697 ft) each year. It is estimated that the Tasman Glacier will eventually disappear and the terminal Tasman Lake will reach a maximum size in 10 to 19 years time. In 1973 Tasman Glacier had no terminal lake and by 2008 Tasman Lake was 7 kilometres (4.3 mi) long, 2 kilometres (1.2 mi) wide, and 245 metres (804 ft) deep.
A large calving event was possibly triggered, or at least contributed to, by the 2011 Canterbury earthquake on 22 February 2011. On this day 30,000,000 metric tons (33,000,000 short tons) to 40,000,000 metric tons (44,000,000 short tons) of ice dropped from the terminal face of the Tasman Glacier and fell into the Tasman Lake. Boats were hit with tsunami waves of up to 3.5 metres (11 ft) as the ice fell into the Tasman Lake under the glacier. Similar events in the past have been attributed to buoyancy effects, a result of high basal water pressures and increased lake level following heavy rainfall events.