Meg and I accepted the call to be His hands and feet in Birmingham, Alabama last week.  We flew out of PDX on March 18 and left Birmingham on March 24. Sponsored by Presbyterian Disaster Assistance, we worked with Habitat for Humanity to build a house for Mary Patterson.  Mary, an African American woman in her mid seventies, has lived through the turbulence of “Bombingham” in the sixties, and the tornado that destroyed her house last year.

She was in her house with two of her great grandchildren when she heard the warning sirens over the noise of the wind and the rain. She took the children into her bedroom closet where they prayed the Lord’s Prayer over and over again, as she thought, “Lord, I ain’t got no one but You.” Suddenly all was silent–the center of the tornado was passing by.  The house shuddered, the sun came out, and her grandchildren left the closet and reported, “Grandma, the kitchen’s gone.” Much of the house was missing. The trees were sheared off in the backyard, but had not fallen on the house. 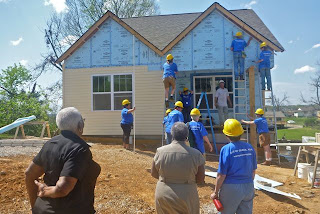 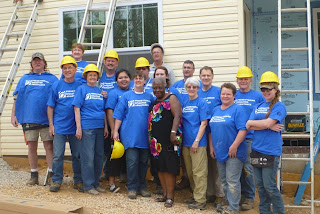 Habitat began building her a new house in early March.  It will be dedicated on April 4. Mary chose to stay in the neighbor where she was born and married.  As she said, “I don’t need a mansion, Lord.  You’ve prepared a mansion for me with You.”