Returning from Trinidad, CA to Oregon, Meg and I traveled a back road along the upper Klamath River, from Hwy 101 to Interstate 5.  After overnighting in Ashland, we continued into central Oregon by way of Lake of the Woods and Crater Lake.  Incredible past volcanic activity dominates the region. Mt McLoughlin reflects in the Lake of the Woods, a steep lava cone built on top of shield volcano, so named because it resembles the flat curve of a warrior’s shield.

Crater Lake, formed inside the caldera created after the massive explosion of Mt Mazama, is the deepest lake in the United States. Famous for its snow melt water clarity and deep blue color, the lake draws the visitor into an incredible serenity of silence.  We had never visited in snow conditions, so this time was especially meaningful.  An impending thunderstorm created excellent light and cloud effects.
We stayed the next night in Redmond. We spent the early morning at Smith Rocks, considered the birthplace of rock sport climbing.  Now an Oregon State Park, It offers over one thousand climbing routes. The rocks are “welded tuff,” formed when hot ash, exploded into the atmosphere, settles in thick sheets onto the earth’s surface, contracting and hardening as it cools.
Finally, we enjoyed the Painted Hills, volcanic ash that has tuned clay like.  The ash was laid down in different geological eras, and is colored according to the type of mineral it contains.  Whenever possible, we never miss a visit here . The intensity of the colors varies according to the time of day; each hour is its own beauty. The area is only lightly visited, and like Crater Lake, the vastness soothes mind and soul. 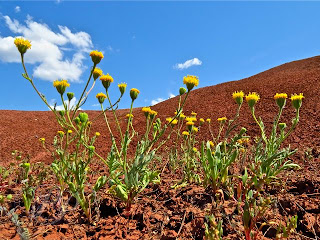 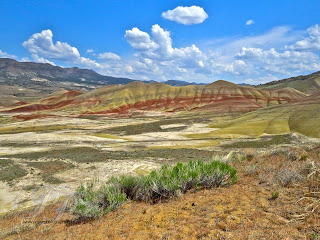