Karamea is home to the Opera Basin in the Kahurangi National Park. It is a thirty five million year old complex of limestone caves, arches, and old growth rain forest. Honeycomb Hill Caves are world famous for their ancient Moa and giant New Zealand eagle bones. These bones are so called “sub fossil” bones, meaning the original form of the bones is preserved and can be DNA tested. Scientists have identified nine different Moa species.These birds fell into the cave system through sink holes and were unable to extricate themselves.
One finds glow worms inside the caves. It seems truly magical to see this starlight glow deep in a cave. Māori call them titiwai, which refers to lights reflected in water. Glow-worms are the larvae of the fungus gnat. Glow-worms need damp places, where the air is humid and still, to construct their snares. Caves and old mining tunnels are ideal. In the forest glow-worm snares are commonest on moist banks beside a stream or in a ravine. To catch small flying insects, the glow-worm sets up a snare of sticky silk threads. Flying insects see the glow-worm’s light in the dark and fly towards it, because it resembles moonlight shining through the trees. Instead of finding freedom, they become trapped on the sticky threads. Their struggles alert the glow-worm, which pulls in the thread with its mouth. The prey is then killed and eaten.
I do not have pictures of the actual glow, but when our guide shown light on them, we could see the long filament snares referred to above.
Honeycomb Hill cave can only be visited as part of a guided tour.  It is closely monitored because of the significance of the  bone specimens. The caves were only discovered in the late 1980’s. We also visited the Oparara Arch, reputed to be the largest in the southern hemisphere. 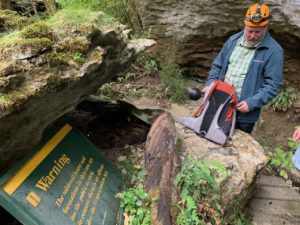 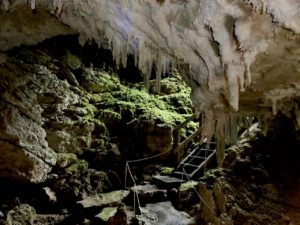