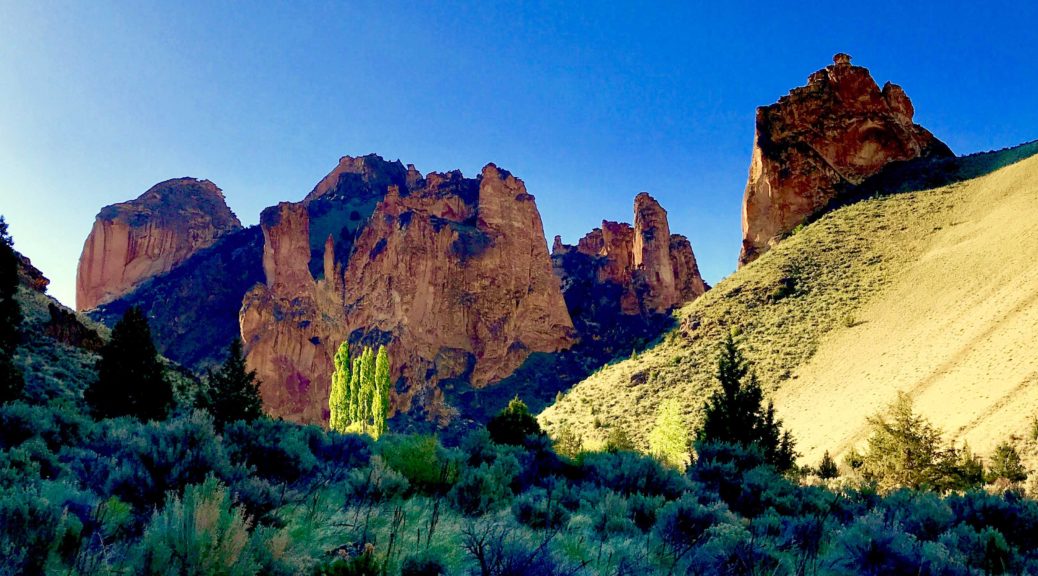 A blend of Zion and Bryce, Leslie Gulch is Oregon’s own fantasy- land of remarkable geology features. From the whimsical to the massive, these gaseous rhyolite tuff deposits of fine volcanic ash and rock fragments have been sculpted over the eons to draw mind and body into a special wonder.

Leslie Gulch is located in the southeast corner of Oregon. The gravel road leaves Hwy 95 north of Jordan Valley, and travels west, ultimately leading down to the midpoint of the Owyhee Reservoir. 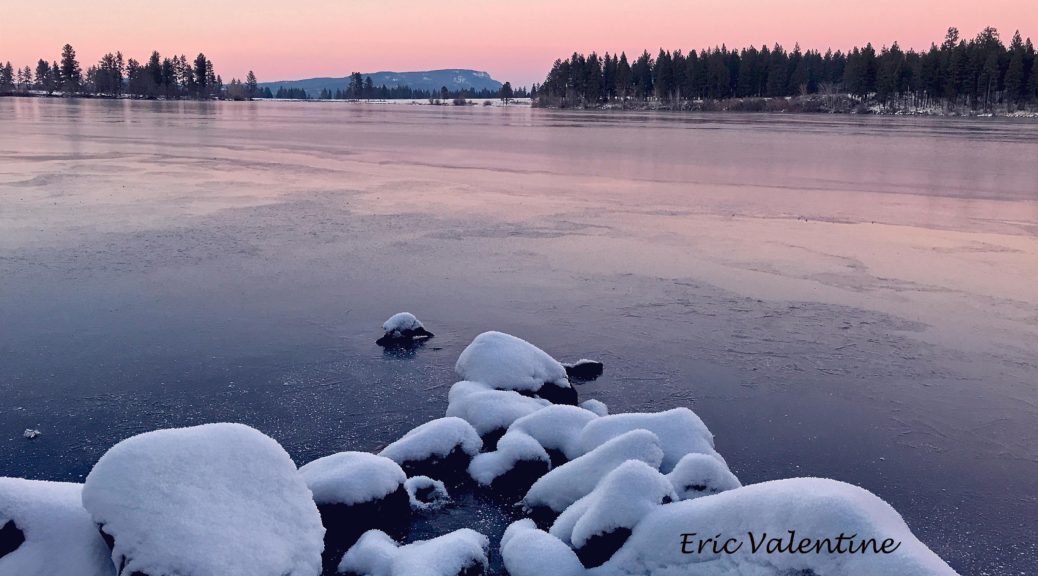 A ten minute drive takes me to Morgan Lake, above La Grande, OR.  It sits in a high prairie, so the afternoon sun sets unblocked by the hills. I love to walk here year round.  Each season brings it own mood. Winter’s late afternoon sun is warm and rich, filled with serene mystery. 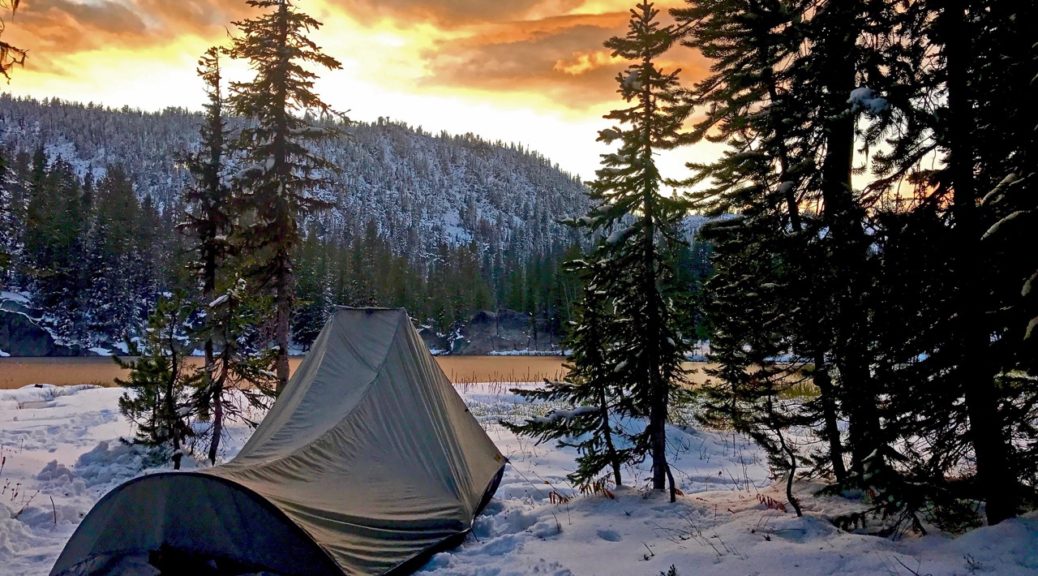 Scouts from Troop 514 left early Saturday for their annual rock climbing weekend at Hoffer Lake, above Anthony Lake.  We knew we would encounter skiffs of snow, but little did we realize we would be breaking trail in close to twelve inches.

We enjoyed true winter camping. The boys adjusted for the conditions, working together to pitch their tents, cook their food, gather firewood and stay warm.

Hoffer Lake was lightly frozen. The late afternoon light created marvelous color tones on the lake. When I awoke Sunday morning after a chilly night, I was grateful to be there, amidst this snow cover beauty, rather than simply sitting in my easy chair at home drinking coffee.  Coffee outdoors by the campfire was much better 🙂

Go to Michael’s blog, <powderhunds.com> to see his pictures which include a fun minute long time lapse video

Well, after seeing a total eclipse we might have just turned into eclipse chasers (a/k/a umbraphiles). Yes, spending 2’4″ in totality was THAT amazing. Our location was a remote mountain in Oregon south of Baker City. Though remote, we were not nearly alone as it is pretty easy to access the ridge we were on and the mountain top itself has an old naval installation. A steady progression of vehicles rolled past our camp all morning so we were up early to hit our chosen viewing spot. At nearly 6000′ in the dry mountains of eastern Oregon we had a cloudless, 360º view of the horizon.

The ridge was quite windy, though the wind really died down as totality approached, so I set up my tripod very low to the ground. I was using a Canon 100-400mm 4.5/5.6L lens on a Canon 70D body with an 18-stop solar filter. We also set up Sara’s iPhone to record the whole scene with a time lapse app. Finally, both my brother and Dad were taking pictures, too. We figured we had it pretty well covered. Little did we appreciate how fast the actual 2 minutes of totality would fly by.

When the sun was about 90% covered it was noticeably darker and cooler. Despite the warm morning I put on a sweatshirt. As I feared, I was actually more focused on my pictures than the approaching shadow. As the sliver of sun gets smaller and smaller, the final shadow rushed over us at +/- 2700 mph. The effect is very startling. We could hear oohing and ahhing all along the ridge (and from our own group). For a few seconds I was so focused on my camera that I initially forgot to take off the solar filter and just look up! Fortunately I realized, I needed to spend a little time looking around instead of just at the camera LCD screen.

The effect is amazing. The entire horizon glows almost like sunset as the light from the horizon, which is not in complete shadow, filters back to you. The sun itself glows out from behind the moon. We were only able to see a few bright planets, but the sky was remarkably dark – far more twilight than dusk. While nothing silly happened on our ridge, it is understandable why people want to get naked and worship the universe! I suspect we will be pointing the van toward Mexico or Texas on April 8, 2024.

Sara: With no camera responsibilities, I was able to sit back and just enjoy the scene unfold. It was fun to don solar glasses and check on the progress, while hanging out on a warm ridge. As the sky grew darker, the air cooler, and the grasshoppers went still, I lay back to watch the final minutes to totality. There are no words to express the wonderment I saw as I lowered my glasses to reveal the majestic beauty of the eclipse. It was hard to know where to look: the highlighted moon, the 360º sunset, the dark blue sky, or the unique light on the surrounding mountains. As totality passed, I first put the glasses back on, but then realized I should  watch the lightening sky around me instead. The first rays of sun made a spotlight on us that grew outward as the shadow raced off to the east. The air warmed and the grasshoppers welcomed back the sun. I continued to watch the progress of the receding eclipse while Michael took pictures. In hindsight, I wish we had brought a colander or other creative pinhole things to play with the eclipse light during this time. It has been fun to see all the pictures of folks experiencing this amazing phenomenon. The beauty of the natural world is unbelievable and until you see a total solar eclipse, it is too! 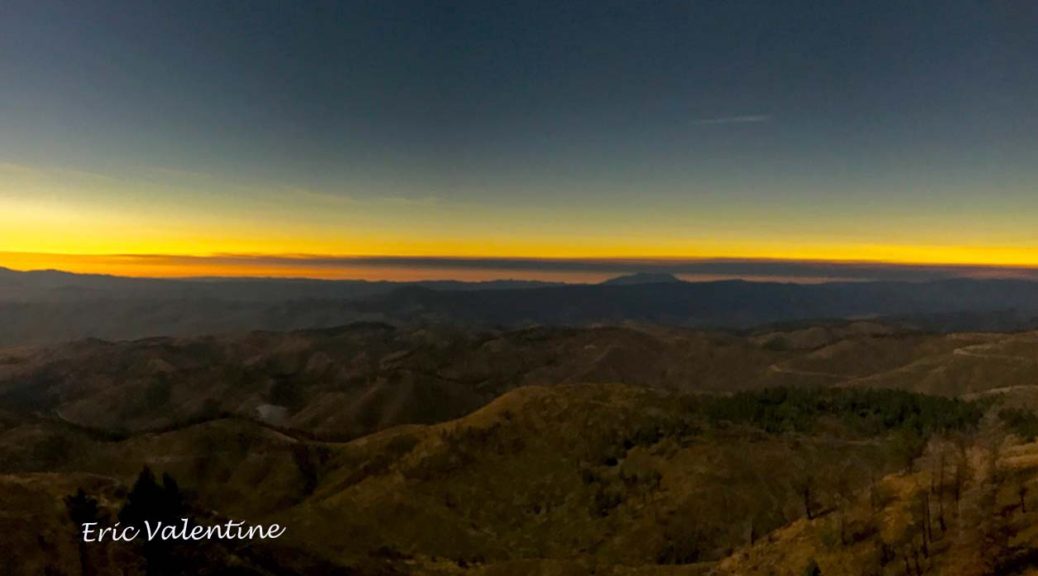 The eclipse was remarkable, resplendent —an experience we will feel deeply, even though words may fail.  Michael was the primary photographer.  He took some excellent pictures, as you can see from the two I took with my iPhone through his view screen.

My deepest memories are how suddenly it became cold as totality approached.  It reminded me of our utter dependency on the sun’s warmth.  Then came the incredible, unique light on the western horizon that I had never seen before– “sunset” came and went in a few seconds.  And finally the sun’s corona, a sight we had never seen and will never see again.  Yet, all remains deeply embedded in our collective, shared memories to feast on, to share with family and with friends. 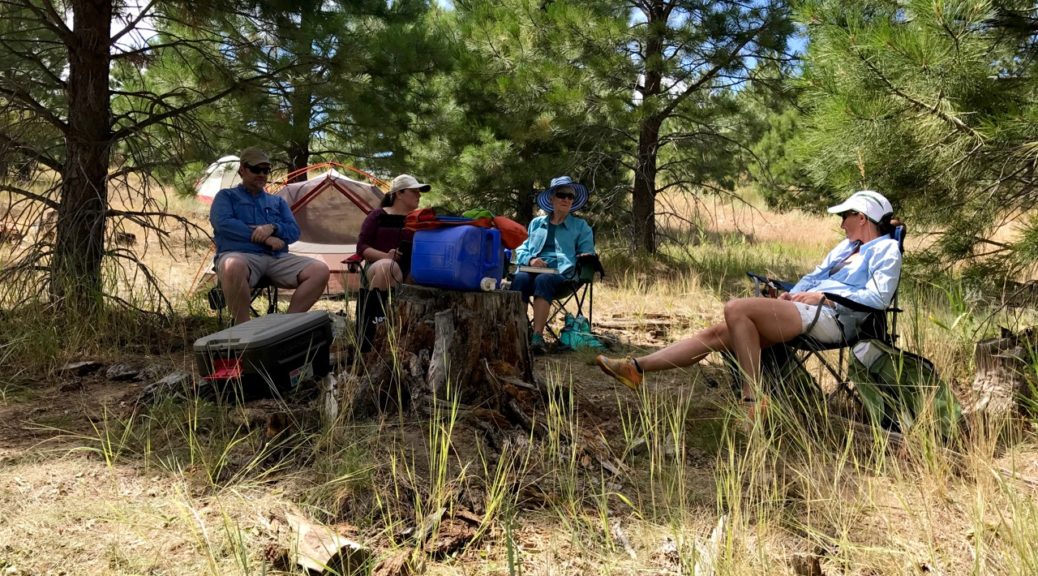 About fifteen months ago, I began planning for the total solar eclipse in eastern Oregon.  I decided on a location right below a mountain top, Dooley Mt, in Baker County,  where an old Naval radar station used to exist.  Meg and I confirmed this site would be ideal over Memorial Weekend.

Serendipitously, September 2 is our Fiftieth Wedding Anniversary. We invited our sons and wives to join us for the eclipse and celebrate our anniversary together.  Matt and Teresa arrived from New Zealand, and Michael and Sara from New Hampshire. We set up camp in ponderosa pine trees on Sunday, and enjoyed conversation, walks, reading and general time together. This relaxing  time created a wonderful intimacy as we waited for the eclipse to begin and then watched it move into totality. 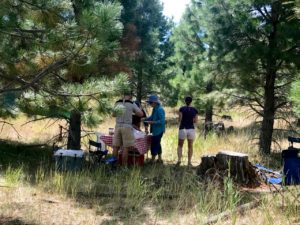 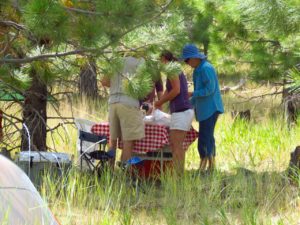 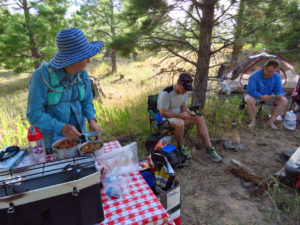